skip to main | skip to sidebar

So I have been pretty annoyed by poker as of late. With the changes to Full Tilt being a complete joke. Some how they change the Rake system so everyone but HU players and SNG players take a pretty significant pay cut! They say they are coming out with some "Player Friendly" updates sometime in January. We shall see about that.....lol.

I plan on updating once a week with a graph and possibly some stats. 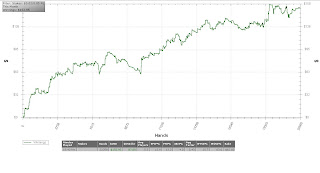 Well I have not posted in over 10mos.............mainly because of being lazy. Tonight I am going to start and couple of pretty big grinding sessions with my buddy Darrin. I figured this is as good as a time ever to start posting again. I plan on a 8 hr session tonight and 12 hr session tomorrow! Should put in about 15,000 hands in the next two days. I will post my results a long with other mumbo jumbo later!

Well I will start off my post talking about the Minnesota Vikings! If you are vikings fan like have been my entire life you how big this game is this up coming weekend! I am hoping that this is the year! I ended up going the game in the Dome vs the Cowboys. I have a ton of pics and even a couple of videos but for some reason I cant get them loaded on here.........oh well! Any who gl Vikes as you embark on an NFC championship!

So I have about 73 $11 45 man SNG's under my belt now and I feel really good about they way things are going. My overall style fits very well for these things and I think I have always been a really good Shove/Fold player! Check out my result below! 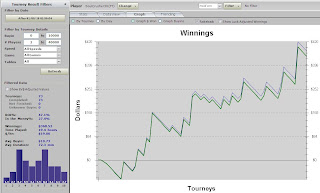 Also Full Tilt has a new game called "RUSH POKER". For the multi-table grinder it is pretty awesome. It allows you to play 4 tables then if you want to quick fold it rushes you to a new table. The cool thing is it lets you keep your stack size thus making for some really good deep poker! I lost a 405bb pot with set over set...........which is a crazy cooler for a 100bb game!

Below are my stats for the month!

Well this has sure been one crazy week! And it will all end with Me and couple of Buddies going to the Minnesota Vikings Playoff game! We are heading down to the Cities here in about 7 hrs and staying DownTown at the Hyatt! Should be a great time!

Well I decided to play some SNG's just to change it up! I actually somewhat enjoyed 9 tabling $11 45 man. I ran pretty damn bad in all in equity as you can see by the charts below. But somehow I managed to Cash 4 of the 17 times and make some $. I am going to play theses for awhile and see how they go. Not sure if I can expect the 35 ROI I am running at but we shall see. 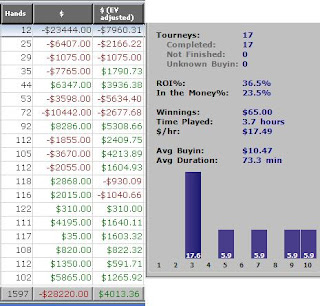 Other then me getting a 37" LCD TV with 195,000 fulltilt points this month has not been going so great! With the amount I have played I would like to be up around $900.........but things have not really fallen into place. For the most part I have run into some really bad spots, had some coolers, and played bad at times as well. Even given the situations if I was playing my A game I should still be up around $500. Well lets hope things can turn around the 2nd half of this month! Pretty sad if I make anything less the $1k for the month.

Well So much for 2010 starting off super hot! My last 4500 I have got absolutely crushed/owned! When reviewing all my hands it really is a combination of things that have lead to this 7 buyin downswing. 1st, in my opinion it starts with running bad in all in equity and getting a few coolers. From there my game slips into about a "C-" as for as overall wellness of play. Then I start playing too many hands out of position and somewhat force things. Getting away form solid starting hand requirement can be a huge leak...........J7 and 85s on the button just are not that much of value. It pretty much came down to me playing 10 hands really really bad that cost me $133. Then top that with running about $183 bad in all in equity. Top that with a couple of coolers...........and it does not take long to be down 7 buyins. I really feel if I was playing my best poker I could have held this downswing to around -3 buyins or so! I really need to keep a close eye on things when they start to slip. The game seems so easy on the huge up swings and so so tough on the down swings. Well below are my stats!

ANOTHER SOLID SESSION (GREAT START TO THE NEW YEAR)

Well I am off and running in 2010! Put together another pretty solid session and a couple big wins getting in racing! As far as today goes............pretty much slept till 6pm. Katie and I were planning on going to the Mall but come to find out it's closed! Really on New Years? Go figure! So we then hit up Culvers and did a little shopping at Walmart! After that we came home a watched "Paranormal Activity". Imo that movie was put together very very well! The actors really seemed to be "acting" normal, like people would do if they tried recording that stuff! Creeping ending and what not! Very entertaining to say the least!

Well below are my poker stats and my yearly graph! Go go 2010!

Well Happy New Year everyone! Hope everyone had a fun and safe Holiday season! Well I sure hope 2010 goes as well as my 1st session of the year went!

So I guess as the norm I should set some goals and what not. From experience I usually notice I don't always up hold on my goals. That's okay I guess as long as my year was somewhat productive and not a complete waste of time. So here are some minor goals for 2010.

So there you have it! A few goals! All very very attainable!

Well this weekend I had my Bday party @ the Hub in Fargo. A lot of friends and co-workers showed up and it was a really good time. I ended up drinking way too much and having way to many shots! But I survived the night and felt great when waking up to watch the Vikings game. My gf Kaite however did not fair so well! But the day was not a total loss as I had a really solid tournament score in the Silver Iron Man $15k. I ended up getting 3rd for $825. 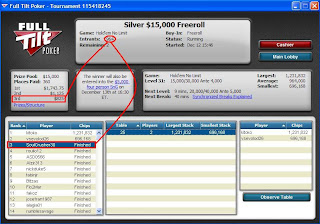 Below is my last poker session as well: 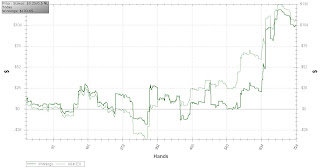 HAPPY 8 MONTH ANNIVERSARY KATIE! (and thanks for making my birthday so amazing!)

So on Wed I woke up with a sore throat and stuffed up head..................I ended up calling into work and pretty much sleeping the entire day (woke up at 4pm). Once getting up I just laid around the apt all day and watch TV. Being so bored I decided to log in a session of poker. Good thing too! Here is how my 1200 hands session went: 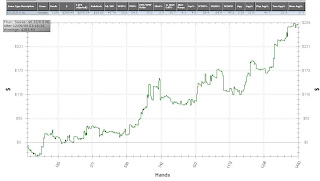